As the bus slowly pulled away from the Immigration border check, my emotions were mixed and confused. I was about to enter a country which just over 20 years previously had been devastated by war  and I felt ashamed that at the time I was not fully aware of  circumstances and events. The majestic mountain gently sloping, forms a protective background for the lush meadows and farms heavy with crops, vegetables, olives, cherries which are nourished by the picturesque Neretva River. Following the river for the next hour or so my mind is stilled by its beauty and colour while at the same time, my heart is saddened by the sight of the ruins and destruction of the war. The road to Mostar in Bosnia and Herzegovina is a contrast of past history and new life with reconstruction and development mingled between the ruins. 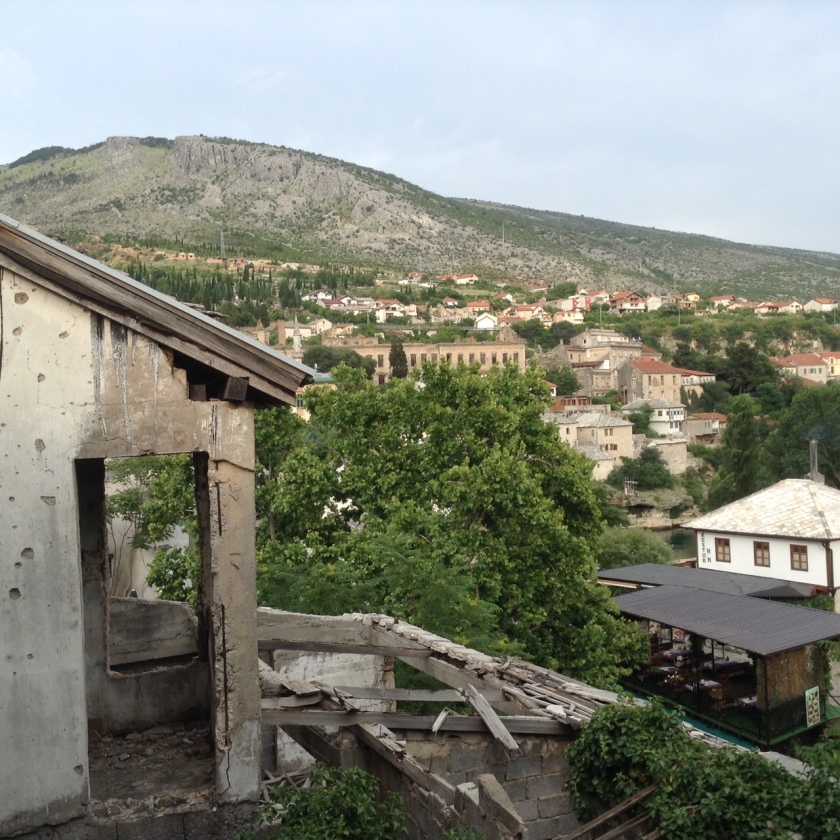 We were greeted with a smile and a handshake by the host of our near-new Airbnb apartment which was located within walking distance to the site of the Old Bridge  – Stari Most.   Walking along the street leading to the bridge, I appreciated the advice given by a fellow blogger to wear practical walking shoes as the mosaic of stone is polished, slippery and at times painful under foot. It was Sunday afternoon and the crowd thick with tourists travelling individually or in groups. Local shop owners selling souvenirs and local handcrafts were anxious for trade while restaurant staff dressed in local costumes offered us their menu and specials for the night. 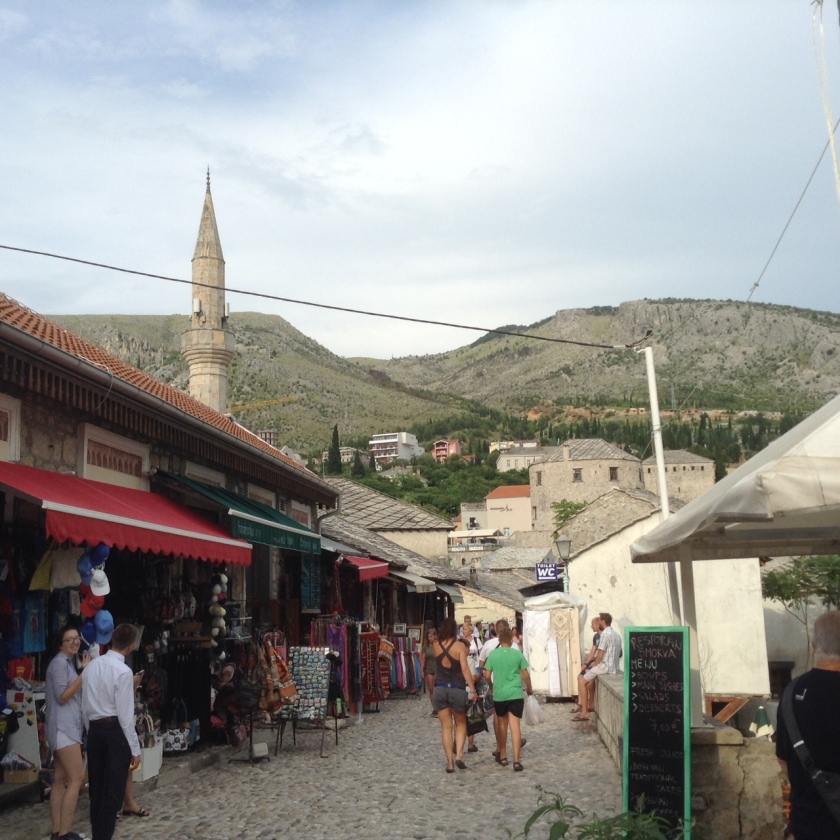 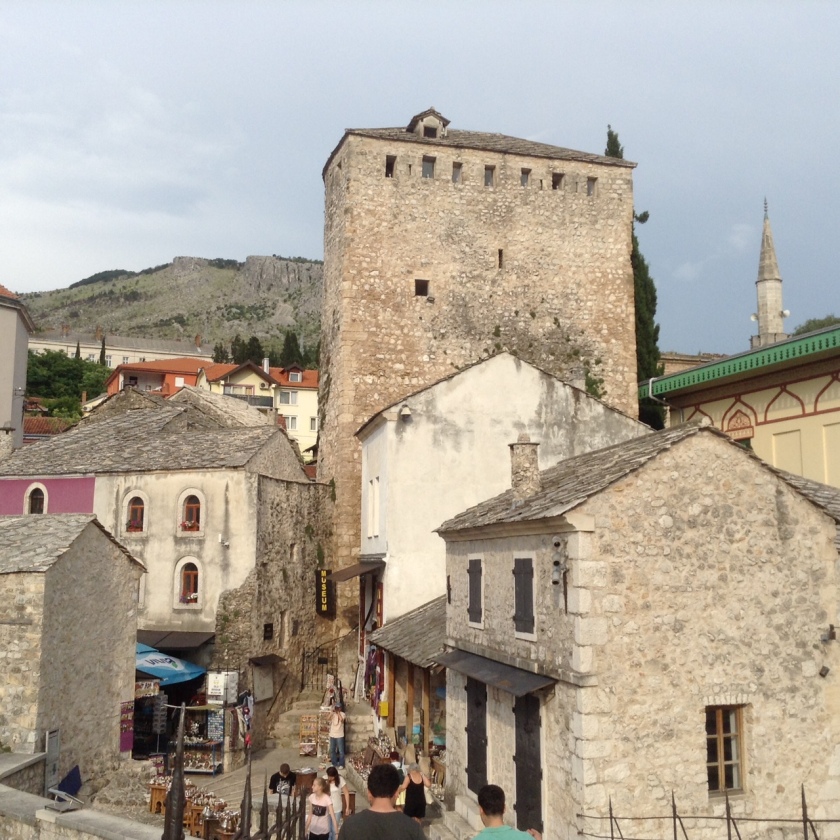 Continuing along the narrow street, we reached the foot of the bridge which was originally built in 1566 joining both sides of the city of Mostar. On 9 November, 1993, the arched structure was destroyed during the Croat-Bosniak war 1992 – 1994 when more than 100,000 people were killed. Reconstruction of the bridge endeavoured to replicate the original Balkan Islamic architecture and finally in the presence of Prince Charles, the bridge was re-opened in July 2004. 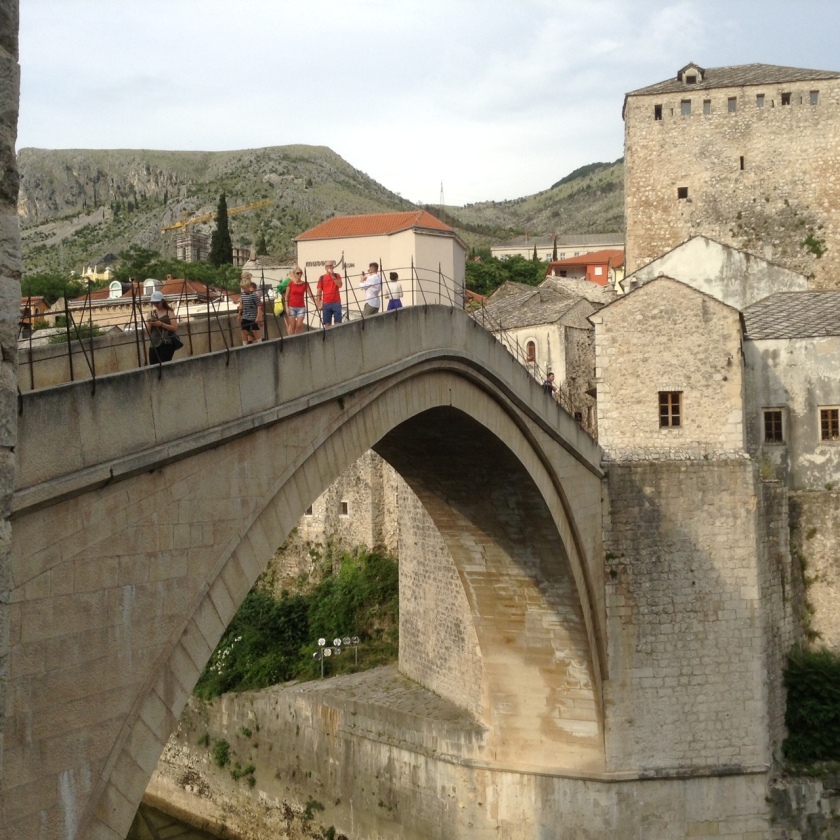 Sitting, pondering, I watched  crowds shuffle past, not looking at the sights or the local shops, just moving along behind each other as they returned to their tour buses. Others  posing in the centre of the bridge taking selfies were unaware they were blocking the path for other visitors. I was unable to image the horrors and pain of the people during the early 1990’s so I continued to reflect and contemplate what I had recently read about the history of this beautiful place. 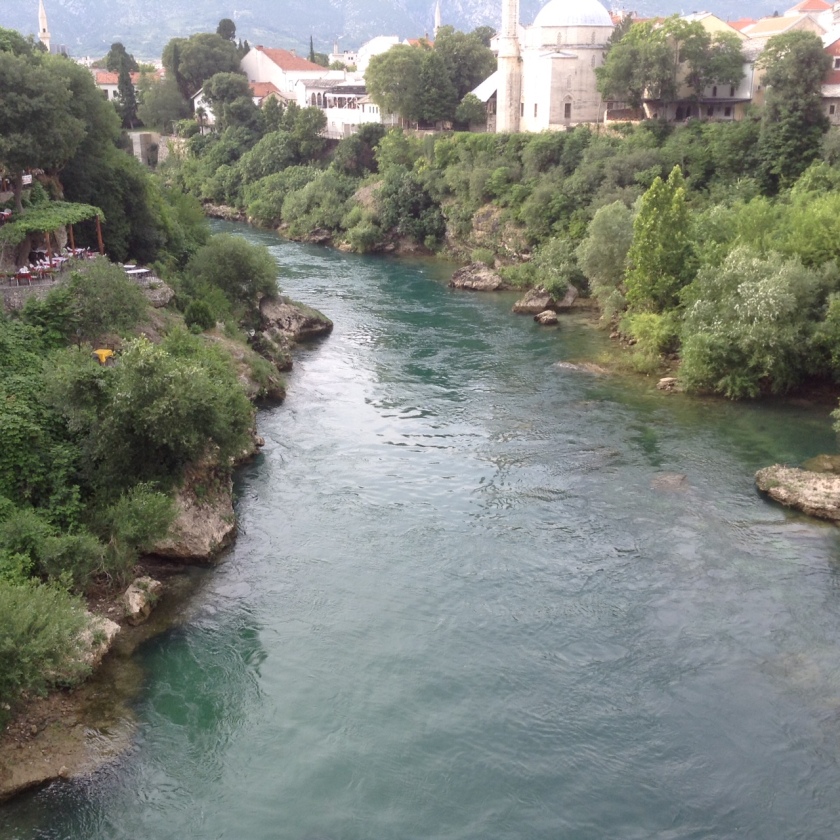 For many people still living in Mostar daily life is filled with memories of the past as they slowly walk past the ruins, carrying their heavy bags and food, climbing broken stairs to their barely adequate homes. There is also significant evidence of optimism and growth; bus loads of tourists are staying in new, modern hotels; there is a huge choice of holiday apartments and home-stays; cars parked randomly on streets are luxury, expensive brands.

Mostar is a city that attracts many of the 1.5 million tourists who visit Bosnia and Herzegovina every year. It is famous for its street art, mosques, waterfalls, markets, Peace Bell Tower and boasts a thriving shopping centre Mepas Mall.  Throughout the city, bells can be heard at 7.00am, 12 noon and 7.00pm every day; the Call for Prayer echoes across the  city throughout the night and day; long blasts on horns from a procession of cars driving through the streets on the occasion of a wedding are a reminder of happy times and flags flying high from vehicles and houses signify the passion for football.

One succinct street art is a powerful reminder for us that

we are all living under the same sky

I am a great believer in natural health and healing and am constantly reminded of the ability that our bodies and minds have to heal. I am passionate about organic products and endeavour to use them in my daily life. Being a conservationist, I am concerned about the future of our planet. I am an advocate for world peace, equal rights for all and animal welfare. My hobbies include reading, writing, travel and engaging with people from all cultures and lifestyles. I strive to commit to daily exercise and most days I succeed and think that an occasional treat such as a small ice-cream or chocolate is perfectly fine. Family and friends are what I value most in life and I pride myself on my dedication and loyalty. View all posts by eastwinglifestyle.com

6 thoughts on “Mostar – Bosnia and Herzegovina”

Your World in Your Hands

Midnight Missives and Musings
My Self Evident Truths...

valid arguments against may be considered

My thoughts about homeschooling, health and fitness, being an expat, kids and just life in general. My personal Lifestyle Blog!

Listen to your inner self..it has all the answers..

A daily selection of the best content published on WordPress, collected for you by humans who love to read.